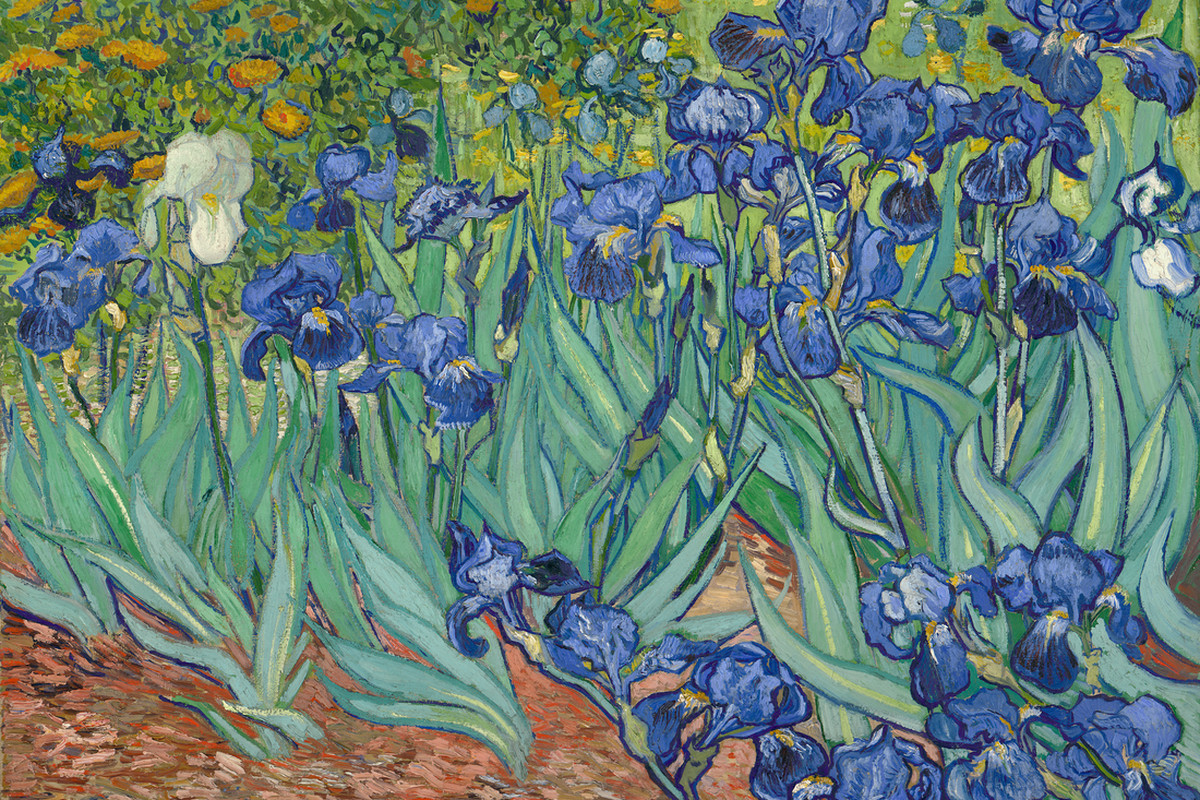 Much of the world’s great artwork is tightly controlled, but the Getty Museum just announced a significant initiative to open things up — its new Open Content Program has made some 4,600 pieces of art from the museum’s collection free to use. Users can visit the Getty Search Gateway to browse through the entire collection of high-resolution images, and they can all be used for commercial and non-commercial purposes so long as they’re properly attributed to the museum. When downloading an image, the site also asks for you to share why you’re using it — so the museum can see why people are downloading its content.

Amongst the many freely available pieces of art released by Getty are a number of quite famous images, including work by Claude Monet, Vincent van Gogh, Rembrandt, and Leonardo da Vinci.  The 4,600 pieces of artwork available are just the beginning, as well. Getty says that it’s actively exploring the possibility of releasing much more art into the public domain, both from the museum’s collection as well as materials from the Getty Research Institute’s special collections. While Getty isn’t the first museum to push forward with an open artwork initiative (the museum cited a number of institutions like the Walters Art Museum as inspirations for the movement), it’s the latest example of how the internet is making classic, famous works more accessible.

OTHER FAMOUS WORKS OF INTEREST

Painting and sharing in the new web site format Studio Journey, with our artist guide Nancy Hillis, brings the fulfillment of granting the permission to create, for many knowledgeable painters from all over the world. Nancy Hillis is an inspiring painter, teacher and medical doctor who brings us all together through the website to share her projects, resulting in the creation of art work and feedback from one another.

Thank you Nancy for leading our inspiring journey, which has just begun.

Check out her website to see more about Nancy and her Art Journey at https://nancyhillis.com

As a beginning, our first intention was to work in a series, encouraging experimentation within a framework of self imposed limitations. Some artists chose limited color range, some chose exploring art mark making. An amazing outpouring of creative production rose from this first task, generating a wide range of very well informed results. I hope to share some of these with you after I gain artist permission for the use of their works in my blog.

For now, I share with you the paintings I have created on this Journey so far. I lost my studio about a month ago and this program gave me the impetus to resume painting again. For that, I am indeed very grateful. September 16, 2016
ARTS & CULTURE
These images, selected from my book Reading Cy Twombly: Poetry in Paint, indicate the range and provocation of Cy Twombly’s works on canvas and paper, pointing especially to his inventive use of literary quotation and allusion throughout his long career and his relation to poetry as an inspiration for his art.

Twombly’s working copy of a paperback translation of Three Secret Poems, by the twentieth-century Greek poet George Seferis, shows his hands-on approach to quotation and revision as well as paint stains from his work in progress. A number of marked passages reappear in Twombly’s paintings of the mid-1990s, notably in Quattro Stagioni (1993–94) and Say Goodbye, Catullus, to the Shores of Asia Minor (finally completed in 1994).

One of a sequence of related drawings, Venus and Adonis (1978) wittily alludes to Shakespeare’s poem of the same title. Along with a series of cleft heart-shaped (buttock-shaped?) and phallic forms poised in suggestive proximity, each drawing contains a flower-like scribble and a foldout book. Perhaps Twombly is alluding to the “flowers” of poetry as well as to Venus’s rival, the boar who gores Adonis with his amorous tusk.

Il Parnasso (1964) riffs on Raphael’s Renaissance fresco in the papal Stanza della Segnatura. Twombly responds in his own fashion to the auratic cultural icons of Rome, drawing attention to the missing role of painting in the representation of learning and culture. The play of line replaces the playing of Apollo’s lyre at the apex of Raphael’s design. Signing himself in the shuttered rectangular window around which Raphael’s fresco arches, Twombly draws attention to the flat surface of the “wail” or support.

The early series of works on paper Poems to the Sea (1959) shows Twombly’s use of horizon line, wave signs, and quasi-writing, along with thick creamy paint, to eroticize the abstract play of repetition. In a series that makes reference to Sappho, Twombly also seems to be alluding to the typographical experiment of Mallarmé’s shipwreck poem, Un Coup de Dés, as a sequence of rhythmic marks and blanks. Non-referential signs tussle with the impulse to “read” and “write,” as if words and thoughts were about to be born from the waters of the Mediterranean.

Synopsis of a Battle (1968) takes Twombly’s blackboard paintings of the late 1960s in the direction of the era’s obsession with space travel, alluding to the blackboard calculations of NASA scientists as well as his own fascination with weightlessness. Abstruse mathematical formulas and recurrent fan shapes suggest orbiting gyrations, rather than battle formations. Cyanotype blueprints for gravity-defying Gemini and Apollo spacecraft were widely available at the time. Here, Twombly designs his own prototype. Twombly’s paired paintings, Bacchus Psilax and Bacchus Mainomenos (2004) show the winged Bacchus morphing into his identical twin, the raging mad god who unleashes a title of blood. Painted during the bloodiest years of the Iraq occupation, when the first and second Battles of Fallujah brought the heaviest urban fighting since the Vietnam War, the Bacchus series has been linked to the fury of Achilles’s twelve-day brutalization of Hector’s body, towed around the grave mount of Patroclus. Twombly’s work elsewhere refers to the destruction of Sumerian cultural heritage.

The middle painting from Twombly’s sequence, Hero and Leandro (1981–84), suggests his interest in the whiteout—an obliteration that is also a kind of memory. As the sea washes through the story of Leandro’s drowning, the liquidity of water and paint eradicate the visible. Drawing on another Mediterranean narrative, Twombly combines his lifelong fascination with the sea with the erasure of a forgotten name, hidden in the darkness at lower right—not Leandro’s, but Hero’s. This article originally appeared in the Paris Review. THE RECENT WORK OF SANDY SASSO The paintings and drawings of Sandy Sasso reign in the forces of nature to tell a story of mysterious talismans, presenting a reality woven from metaphoric symbolism and imagination. The results form an astute observation of a current collective consciousness and state of mind of our world today.

“I am still haunted by the names of the seas of the moon… Sea of Crisis, Sea of Rains, Sea of Tranquility, Sea of Cold…. they sum up my response to the atmosphere of fragility and uncertainty that permeates the world now. I ordered a 3-D moon the size of a tennis ball that I suspend in still life set ups of illuminated objects from the woods around our house.”

Sea of Rains
22x5inches, charcoal, conte on paper, 2016
This drawing is currently in Ways of Seeing, a traveling exhibit organized by the Kentucky Arts Council. Sites are Hindman; Richmond; Williamsburg, Somerset, and Madisonville.

“I have been working on a series of paintings and drawings united by the theme of the mares, or seas of the moon. Several of these paintings were on exhibit in Paducah, KY; at the Legacy exhibit of past and present art teachers at the Paducah School of Art and Design, and in Different Times Different Places, a group show at the Ruth Baggett Gallery. The entire body of work has just been shown at the Murray Art Guild in March, 2017 in Sea of Crisis, a solo show.”

Artist Sandy Sasso lives with her husband, artist Paul Sasso in a lovely home they designed and built, surrounded by their own splendidly created gardens in Western Kentucky. Their daughter, now grown is Maggie Sasso, also an artist.

Sandy has also taught as a high school visual arts teacher in Murray Kentucky, and most recently taught a painting workshop at Arrowmont School of Art and Craft in Gatlinburg, TN in early November, 2016.

“It was really great to teach again, and the students and the facilities at Arrowmont were all exceptional,” she says. “The horrible fire happened two weeks after I was there. Though three buildings on campus were lost the studio/lab buildings are intact and all classes are on schedule for 2017. ”