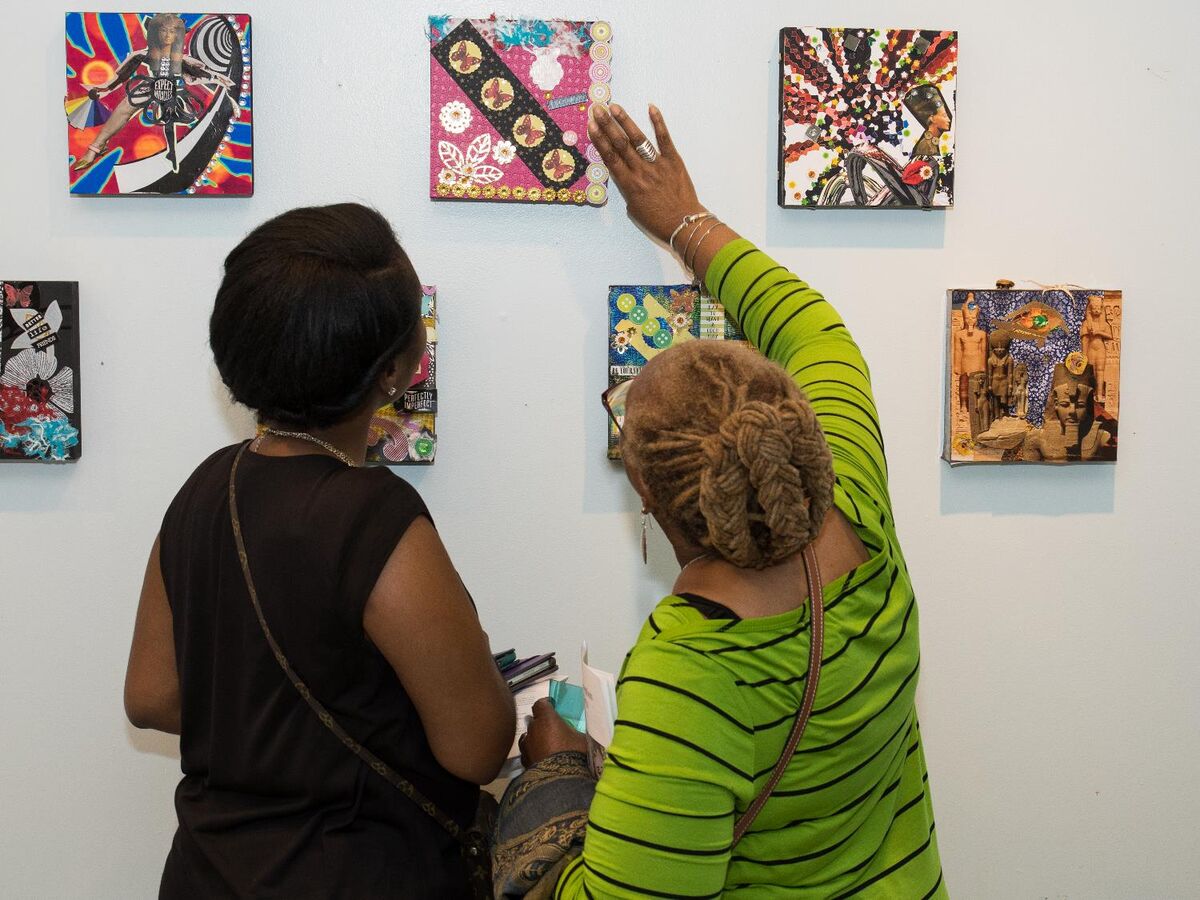 On a recent Thursday evening in Brooklyn, a handful of older adults clustered around artist Ebenezer Singh in the basement of Williamsburg’s Leonard Library. They watched intently as he deposited several dollops of paint onto a palette, picking up his brush to mix Indian yellow and sepia with a few droplets of water. “See how much water I’m using?” he asked, his small audience nodding affirmatively.

Singh dabbed the resulting golden-yellow wash onto the paper as a base layer, leaving strategic swatches unpainted to mark a tree and the bank of a pond. “Let the paint and the paper breathe,” he counseled. Soon, he deemed his class ready to select their own landscapes to paint from a stack of glossy printouts.

In summary, it was a typical amateur watercolor course. But it’s also part of a quiet revolution helping to redefine how we grow old.

Singh’s class at the Brooklyn library falls under the umbrella of “creative aging,” defined by executive director of the National Center for Creative Aging (NCCA), Jennie Smith-Peers, as “any opportunity for an older adult to be engaged in a meaningful opportunity to express themselves through art.” It isn’t limited to the visual arts; creative aging encompasses theater, dance, music, poetry, and more. 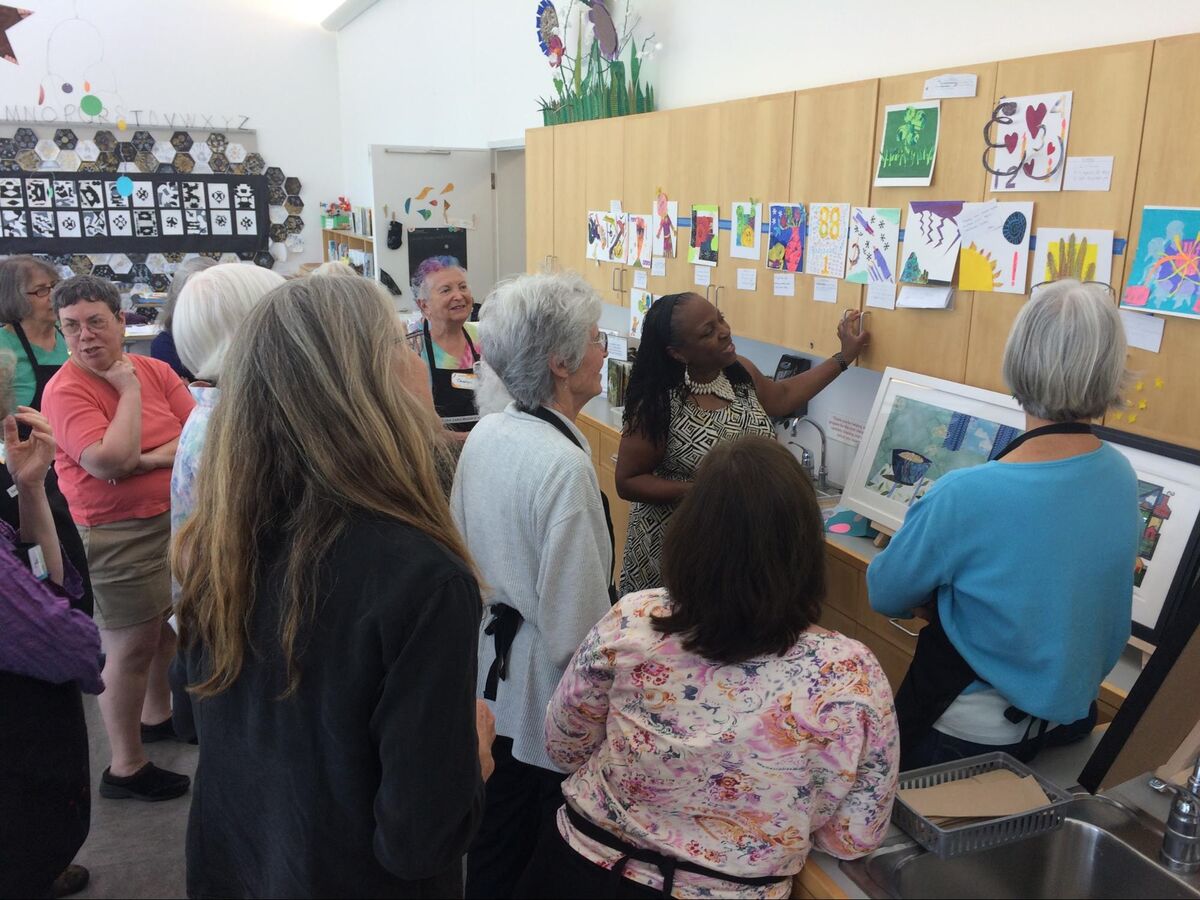 The key element is that the classes teach a skill, rather than simply asking someone to construct a pre-made kit; they push for mastery instead of busywork. Sonia Lopes, one of Singh’s students at Leonard Library, echoed this sentiment. “He teaches like an artist, not like it’s arts and crafts,” the 56-year-old told me.

As recently as 20 years ago, this would have been considered a novel approach. “Historically, both science and culture in Western societies have focused exclusively on the negative sides of aging and ignored the positive,” wrote Gene D. Cohen, a pioneering geriatric psychiatrist, in the introduction to his 2005 book The Mature Mind. The prevailing belief was that getting older meant a decline in brain function and an inability to learn new things.

Cohen, however, challenged these assumptions with a series of groundbreaking experiments. In 2001, he received a grant from the National Endowment for the Arts (NEA) to study 150 adults in Washington, D.C., aged 65 or over. The “arts group” met weekly for much of the year, participating in something akin to a college arts course that incorporated at-home practice and a final project; the control group did not take part in such a program. 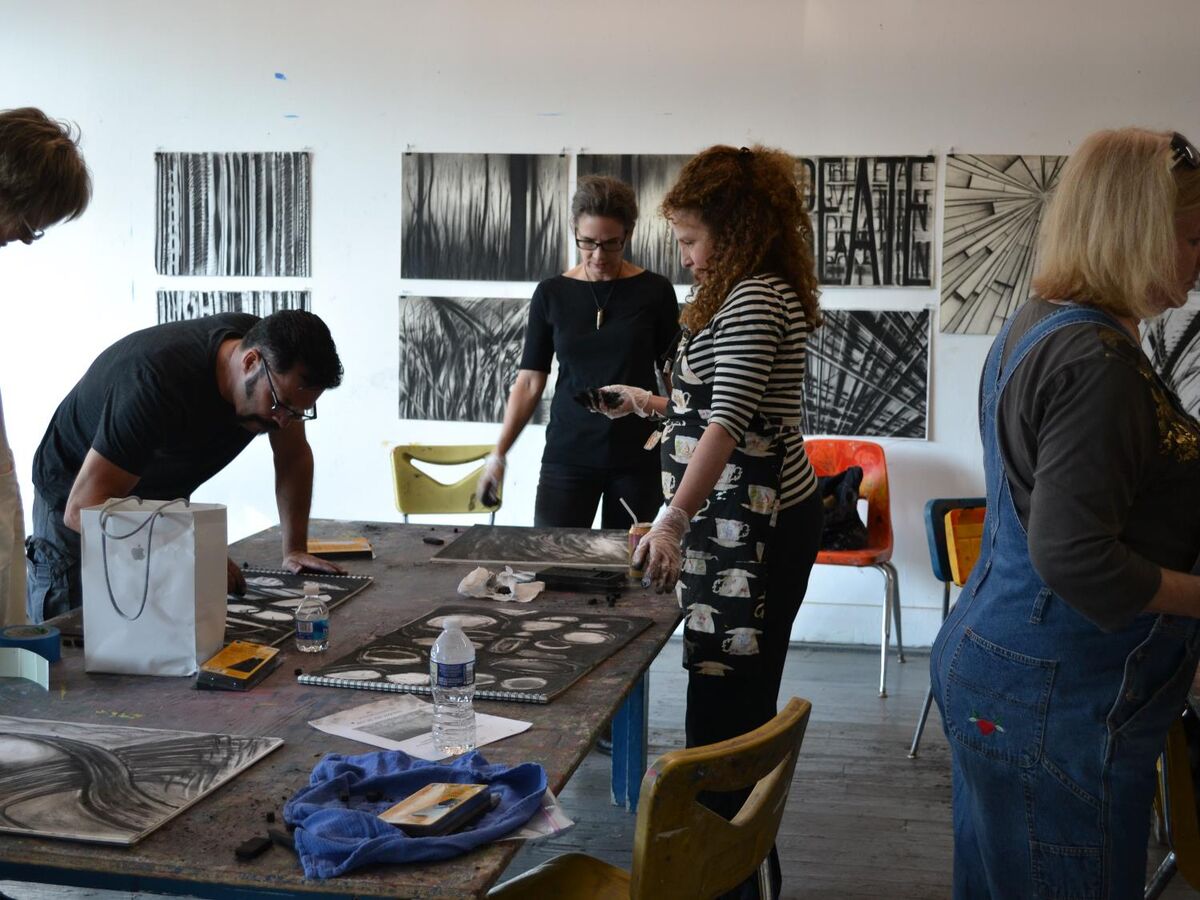 These findings, published in 2006, laid the groundwork for the nascent field. Soon after, Maura O’Malley, a caregiver with a background in arts education, was asked to join a committee considering how creative aging might be implemented in New York’s Westchester County. While there, O’Malley reconnected with a previous acquaintance, Ed Friedman, then-deputy director of the Bronx Council on the Arts. Together, they identified a major issue: “There was essentially no infrastructure for developing and delivering arts programming for older adults,” explained O’Malley. It was difficult to find trained teaching artists, and even existing programs displayed ageism by assuming “that older adults are not creative or learners,” she noted.

So the pair founded Lifetime Arts in 2008, with O’Malley serving as CEO and Friedman as executive director. Today, they provide practical training and support that has allowed a wide range of community organizations to build up their own independent creative aging programs. But in their early years, they worked primarily with libraries, piggybacking off a system that already offered free resources to local communities. Most library programming for older adults at that time focused on topics like navigating credit cards or understanding Medicaid, said O’Malley—“all very important end-of-life issues,” she acknowledged. “But there was very little, if any, programming around learning or creativity or engagement, aside from the sort of one-shot deal, passive entertainment. You know, your macaroni-on-cardboard kind of stuff.”

Lifetime Arts also began to train teaching artists to work specifically with older adults. “The majority of teaching artists across the country are working in the K-12 arena, and have been for the past 40 years,” O’Malley said. (Singh, a longtime teaching artist, said he works primarily with children through Agnes Gund’s Studio in a School program.)

In fact, O’Malley points to children’s programming in libraries as a prototype for the creative aging movement. “Thirty to forty years ago, librarians weren’t particularly interested in having kids running around libraries,” she said. “And now, every library in the United States has storytime many times a week, and there is an enormous amount of professional development and program funding and advocacy around early literacy and public libraries.”

The Brooklyn Public Library’s creative aging program—of which Singh’s watercolor class was part—came about through a collaboration with Lifetime Arts that began in 2011. The program is now independently funded, making it “a kind of a model exemplar of the work that we want people to be able to do,” said O’Malley. 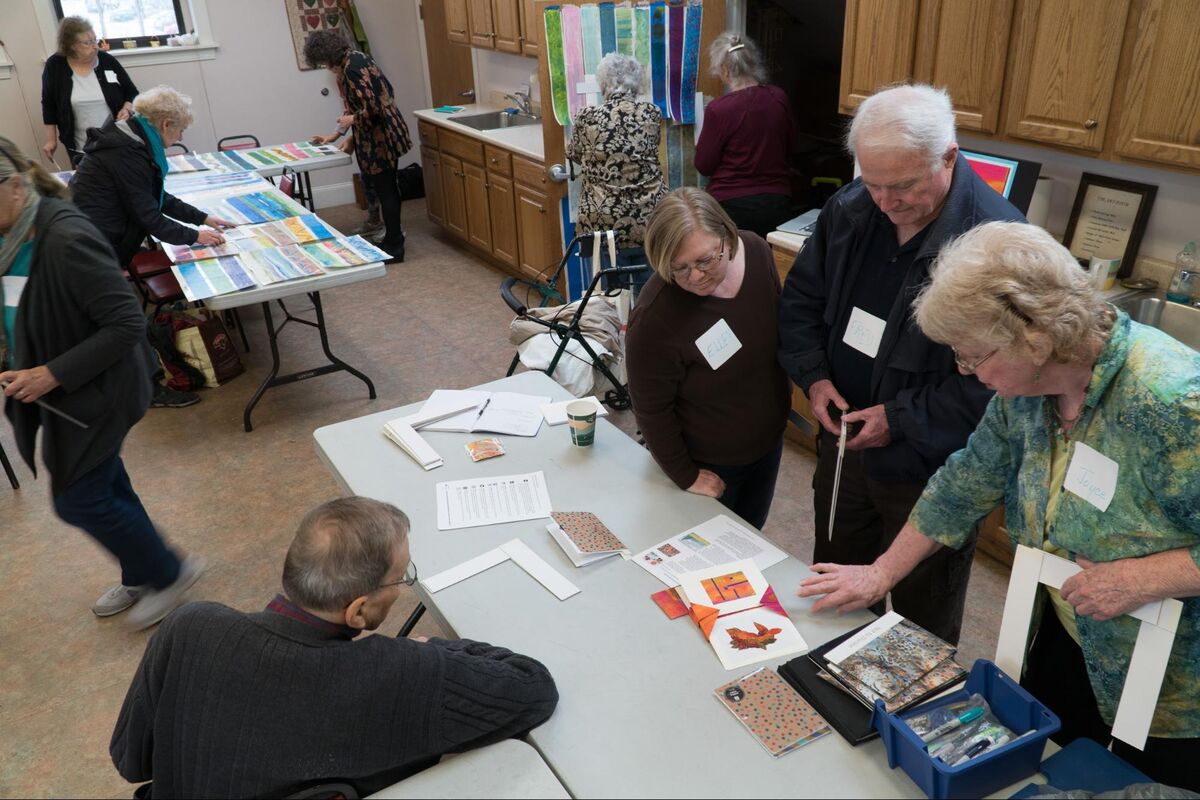 The NCCA also offers training and resources for those institutions ready to embrace the benefits of creative aging. “We’re seeing it become more and more a part of the culture of community centers, of long-term care facilities,” Smith-Peers, the executive director, said. “It’s no longer an afterthought. The arts are what make these places for older adults a more interesting, meaningful place to engage in and to live in.”

A program called EngAGE is perhaps one of the most high-profile examples. Tim Carpenter, EngAGE’s founder and CEO, collaborated with Meta Housing to build several “artist colonies” across Southern California. These affordable apartment complexes feature a robust slate of art courses for residents, as well as dedicated studio and theater facilities.

Creative aging programs, O’Malley noted, can be roughly divided between those that focus on “lifelong learning” and those dedicated to therapeutic work. (Lifetime Arts focuses solely on learning.) Therapeutic work includes programs for people with dementia or Alzheimer’s. Museums are often involved in this work—Meet Me at MoMA, for example, has invited caregivers and dementia patients to the Museum of Modern Art in New York for tours, and has led to measurable benefits for participants.

Although the field of creative aging has undoubtedly grown since the early 2000s, both Smith-Peers and O’Malley noted that it’s still quite small. To keep up with the rapidly aging generation of baby boomers—between 2005 and 2030, the number of adults aged 65 and older will practically double, jumping from 37 million to 72 million—they will need more hands on deck. While there have been additional studies since Cohen’s original experiment, a 2013 report from the NEA identified problems with the academic literature. Samples are often “too small, nonrandom, and poorly defined,” there’s often no adequate control group, and it can be difficult to replicate the experiments.

“When you look at other fields, like expressive arts therapy, they’ve done a really good job at building a critical mass around their work and why it’s important and what it affects. I think we still have a little ways to go before we get to that space,” said Smith-Peers. “We need more research in the community wellness space and the public health space. How does our work affect the social determinants of health?”

But she’s certainly seen the benefits of these programs first-hand. During one of her first jobs in creative aging, with the Brooklyn-based program Elders Share the Arts, Smith-Peers recalls participants saying, “I can’t take that class, I have nothing to offer.”

“I would encourage them to try it once,” she said. “And then I would watch them come back the next week, and by the end, they stuck it out 12 weeks and had a portfolio of art and called themselves an artist.”

“I don’t think that that’s a singular event,” she continued. “So much of our world tells older people they can’t. And it’s not just in the arts. I think there’s so much ageism and isolation that when you walk into a space that says, ‘Yes, you can—and we’re going to show you how,’ it’s a breath of fresh air.”

“A living room is a great space to embrace thoughtful disorder, such as through an artistic gallery wall, mix-and-match throw pillows, open storage baskets and fun furniture…”  From this Houzz story on How to Decorate A Living Room.

How to Decorate a Living Room

Another Gallery Wall in your Home:

Gallery wall includes painted panels on left, by Karen Jacobs, top right image is painting on paper by Lee Brewster and the bottom right is a fine art print by Jan Kirstein. For inquiries about the work on Lee Brewster and Karen Jacobs you can contact me on this website. Also I have stories on both of these artists on this blog as well. To find out more about the fine art print by me, click here.

Create a gallery wall in your home. If you would like help with this fun project, just email me at janiskirstein@gmail.com, or contact me on this website. I would love to hear from you and help you out with choosing your preferences.

Our painting Journey Continues with Nancy Hillis’ Studio Journey online abstract painting workshop. Her assignments help free up your expressive inspirations through exploration and self confidence. Growth emerges through experimentation. My own personal journey has opened up possibilities far beyond what I faced even weeks ago. Thanks Nancy!

Painting in a Series

I share a studio with two other artists in Louisville Kentucky. We just recently had a very sad encounter with reality in the form of a homeless man who lingered constantly around our studio door. The story around this man unfolded in a series of tragic vinyetts leaving us all with a renewed awareness of the fact that the problems facing the homeless are, in fact, everyone’s problem.

These paintings and more can be purchased at https://kirsteinfineart.myshopify.com